Works of Sculpture Are Launching Pads of Consciousness—

Rocks embody a silence that dates back to the creation of the Solar System: Masses of granite, layers of limestones, dolomite, chalky, flinty layers, horizontal, tilted and vertical, containing 50 million to 1 billion years of existence—

Sculpture is shaping masses by forces in space and time—extending beyond the human realm. "Plate tectonics" is sculpture—the drift of the continents, the colliding and uplifting of the mountainous ridges, the folding of the earth's crust—Man shaping micro-masses by his minute ability, joins for a split second, these cosmic processes—

A rock is a universe, a slowdown, an accretion of ephemeral particles. The particles can be 20 billion years old, as old as the universe—

Homo-erectus conceives the "Downward" direction of his legs as fatigue, exhaustion, the dust from which he originates and to which he returns—the direction of surrender, of gravity, the erosive end of all uplifts of entropy—

"Upward" direction of his head is conceived as spirituality, the Olympus, the Revolt— This psycho-physical orientation lies at the origin of the archaic drive for the vertical take off— Soaring vertically, anti-gravitationally, rebelliously, anti-enthropic, severs the Gordian knot of hopelessness. This is an absurd inspiring drive—the archaic-mythical and the rational combined within oneself—towards the eternal infinity of universes—of clusters of universes - - - – – – — — —

(Distilled from an artist statement by Ezra Orion) 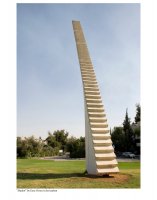 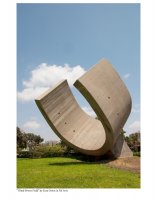 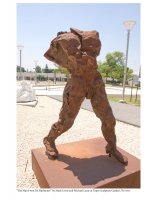 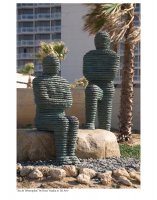 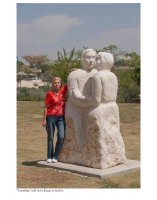 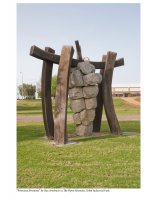 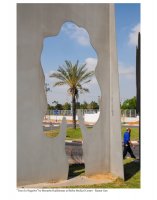 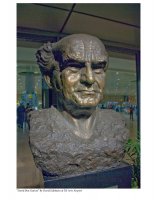 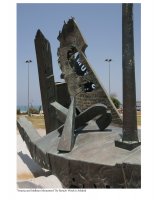 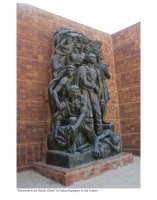 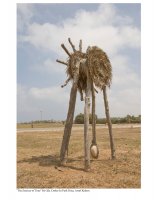